Trends have always influenced city builders. In the 1950s it was urban renewal. In cities all over America, great swaths of so-called slums were razed and replaced by new development. In the '80s it was aquariums and festival marketplaces. Today it's stadiums and casinos.

At least as far back as 1805, city planners followed the latest trend. After downtown Detroit was destroyed by fire that year, Judge Augustus Woodward based his rebuilding plan upon L'Enfant's plan for Washington, D.C. There were the same broad avenues, the same circles and plazas, the same sitting of major public buildings at focal points. Though only built in part, Woodward's baroque plan proved remarkably influential on Detroit's future. It's what befuddles every motorist who ever gets lost trying to navigate downtown streets. But Woodward's radials and plazas also gave downtown its defining spaces — Grand Circus Park, Woodward Avenue and the odd-shaped blocks and quiet corners such as Harmonie Park. 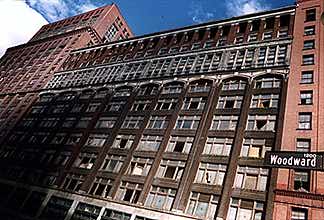 Today an urban planner named Ken Greenberg, a lanky Toronto resident with worldwide experience in planning, hopes to update the Woodward plan for the 21st century. Greenberg has been hired by the Greater Downtown Partnership to map a plan for downtown. The Partnership is an enormously influential private group backed by corporate dollars. In the current climate in which Mayor Dennis Archer seems assured of an easy re–election and corporate giants such as General Motors focus on reshaping the environs of the Renaissance Center, Greenberg enjoys a unique opportunity to get something done.

After 20 years in which formal planning was all but annihilated by Mayor Coleman Young, Greenberg is the first planner to win broad support for his work since planners envisioned the Civic Center and Lafayette Park in the 1940's, `50s, and `60s.

Greenberg's preliminary plan for the central business district, unveiled last week by Archer, represents the distilled wisdom of decades of debate in Detroit and in urban planning circles. There seems no question it represents the best that the planning profession can give us. The question, rather, is whether it can be transferred from drafting tables to the reality of city streets. For Greenberg's plan bumps up against the same limitations that every plan since Woodward's has: lack of money, the reluctance of private property owners to conform and the machinations of politics and development.

Before we look at its problems, though, let's examine the plan itself. In brief, everyone knows that downtown is a collection of isolated spaces with nothing to connect them. Greektown is only blocks from the Fox Theatre district, but it might as well be a couple of miles. The riverfront district with its trendy restaurants and night spots is cut off from the rest of downtown. What downtown needs, and what Greenberg tries to deliver, are ways to link the various districts.

There are lots of ways that planners try to link districts. One is simply to be more careful in how and where we build major buildings. Everyone agrees it would be a disaster if the new Tiger Stadium is built amid an expanse of concrete parking lots like a suburban mall. Rather, the stadium ought to be tucked neatly among a variety of other attractions, such as shops, cafes and loft apartments. As Greenberg explains, "The trip from parking to the stadium is an important event. That should not be a wasted trip."

Greenberg and his backers hope to pack enough smaller attractions in between the main features — the mortar between the bricks, if you will — to make downtown a much livelier place than we find it today.

Downtown, in Greenberg's view, must become a series of "linked urban villages" connected by a continuous series of shops and residences and by a streetscape that's friendly to pedestrians. His preliminary plan hints at accomplishing this through the use of extensive tree plantings, rerouted auto traffic, creation of bicycle lanes, the use of shuttle transit systems and so forth.

Keep the words "linkages" and "synergy" in mind. These concepts are key to all that Greenberg envisions. "There's a great deal of attention being paid to traffic patterns," Greenberg told the Metro Times. "We need to get people to walk and actually use downtown."

Much of what Greenberg envisions will reinforce Judge Woodward's 1805 plan. But he adds a couple of wrinkles of his own. Greenberg calls for a spacious park to be built at Woodward and Michigan, replacing Kennedy Square and redefining the area known for more than a century as Campus Martius. Greenberg has also given a new name to the streets that circle the fringe of downtown south of Grand Circus Park. He refers to this area as the "necklace district," after the unusual pattern of streets and blocks that resulted from Woodward's plan.

In some ways, Greenberg's plan for the Lower Woodward district states the obvious. Downtown would be better if more people actually lived and worked there. His plan calls for encouraging the development of loft apartments and condominiums in the necklace district and elsewhere downtown, much as we see in Greenberg's hometown of Toronto or in many of the other cities where he and his partners have worked, including Minneapolis-St. Paul, San Diego, Denver, Amsterdam and San Juan, Puerto Rico.

But if Greenberg's vision belabors the obvious, it also presents an exciting concept of what the central business district could become. The question is whether the district will ever live up to the visions.

There are grounds on which to critique Greenberg's work, with the caveat that a full assessment must await the full development of his plan. What was released last week was only a conceptual vision, to be broadened and strengthened in months to come.

But based on the preliminary release, it appears that the faults of Greenberg's approach lie not with what his plan will do but with what it won't. His approach may reflect the state of the art in urban planning, but there are other approaches that may work as well or better. Start with the process. To his credit, Greenberg and the Downtown Partnership have listened to dozens of people—tenants, residents, corporate executives, other architects and planners — in a series of meetings. But the process remains private.

In a town in which secrecy has long been part of government, bypassing the public planning agencies still ranks as unusual, although insiders say they fear getting “bogged down” — as one of them puts it — and losing momentum.

On another front, some downtowners express a concern that Greenberg's plan — or any such plan — may ignore the city's underlying economic realities. Downtown has been losing workers and tenants to the suburbs for years.

The reason there's a gap between Greektown and the theater district, some say, isn't necessarily because our physical planning has been poor. It's because the derelict buildings in the way no longer present any market opportunity. If there was a genuine way to make money from downtown investments, people would make those investments. Much of our worry over our lack of street life would take care of itself.

In this light, it may be less important what connective links Greenberg envisions than to figure out how to jump start downtown's economy. If Greenberg's plan presents a lot of pretty pictures without giving any details on how it's going to happen, it may raise false hopes.

This is a real possibility. Greenberg's plan speaks of creating new buildings sized to human scale, not behemoths isolated from the rest of downtown. Yet the first new buildings to be built in the near future may be two stadiums and three casinos. All of those projects will be gargantuan, and they promise less the intimate scale of the best parts of Toronto than the sort of mega-hit that Coleman Young always favored. Of course Detroit needs more walkable streets and a livelier pedestrian mix. But there is nothing in Greenberg's optimistic vision that guarantees we'll actually get it.

Finally, Greenberg's plan, like all urban planning projects, most likely will display a built-in bias toward building our way out of trouble. By focusing on where stadiums should be built and how to route pedestrian traffic, the plan will emphasize the physical structure of downtown.

There is a fair amount of opinion today that downtowns revive only by taking care of these more operational necessities first. Take parking enforcement as an issue. The city of Kalamazoo, to cite one example, decided a few years ago that its downtown parking problem needed to be addressed. Too many tickets were being written; it was too hard to find a parking spot; workers and visitors to downtown were actually being driven away. The city devised a comprehensive plan that today manages the entire downtown parking scene. Parking tickets are viewed not as a revenue source but only as a way to nudge motorists toward more efficient areas to park. Out-of-town visitors are given a warning instead of a ticket the first time. Ticket-writers don't start papering windshields until after morning rush hour to give workers a chance to make those stops for coffee or dry-cleaning. The philosophy is to make parking contribute to downtown Kalamazoo's revival, not impede it. Partly as a result, downtown Kalamazoo today is a livelier, more economically vital place than it was 10 years ago.

Many cities have created so-called business improvement districts, or BIDs, to manage such issues. BIDs are small districts in which property owners pay a fractional amount of additional tax (perhaps a couple of hundred dollars a year per building) to fund a local management district. An elected board of property owners uses the fund as it sees fit. It may hire security guards or clean the streets or hire tour guides or create new parking—whatever is necessary. There's little or no bureaucracy and the response to problems is immediate.

BIDs are extremely popular among urban thinkers these days. They have been credited with helping revive a whole series of downtowns across America. Detroit does not have any BIDs yet. The idea has been floated but has not gotten anywhere.

To be fair, BIDs may not be the answer for Detroit either. But it's safe to say that unless downtown Detroit addresses its underlying problems — economics, parking, security — Greenberg's plan may not help.

It may sound like the yellow brick road to the Emerald City, but it could turn out to be the same old path to nowhere.